It is with deep sadness that we note the passing of one the clubs most popular wife and mother, Robyn Aitken. 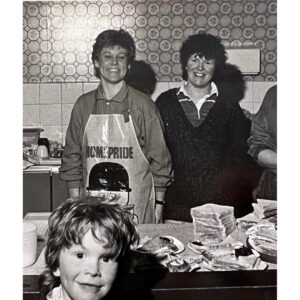 Being the wife of the club captain (1977,78 & 84) and mother of the club captain (2009 & 2010), Robyn was often found after the games on Saturdays in the kitchen helping to serve the players their after game meals.  However this was often extended after the pubs closed when Andrew brought his team mates home for rounds of toast at silly am o’clock.

Our thoughts go out to Husband David, Son Andrew, Daughters Louise & Lindsay and all her beloved Grandchildren

The funeral will on Wednesday 14th September 13:00 at Mortanhall, then everyone is welcome back to Penicuik Rugby Club afterwards.

Another one gone too soon.