We are now in week 3 of the season.  Understandably all rugby action was postponed last weekend with the passing of Her Royal Majesty Queen Elizabeth II

The 2xv game at home to Corstorphine has now been rearranged for Sat 29th October 3pm (Note Scotland face Australia at 5:30pm)

This weekend we welcome our Midlothian neighbours Dalkeith to the Old Pavilion.  Our 1xv haven’t faced Dalkeith since 2017, we look forward to welcoming  Jason and his team to the Old Pavilion and to club president Harry Graham into the clubhouse before the game.

Earlier in the week we posted several archive photo’s of past games against Dalkeith.  It was enjoyable to see our Editor bravely securing ball against several Dalkeith players which we think was 2000/01 season. (ed – I broke my foot in this game, this was the days before moonboots and they gave me the worst set of wooden crutches) 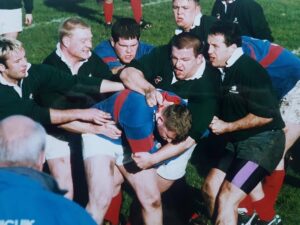 Grab a coffee sit back and have a read. 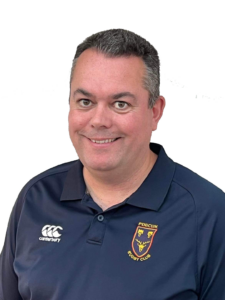 After a week of reflection for many it feels good to look forward to a weekend of rugby.

It was great to see Sarah’s name announced in the Scotland World Cup squad this week. Well done Sarah another great achievement to add to the already long list and I know how proud everyone at the club is of what you continue to achieve. Sarah is huge inspiration to us all and it will exciting to follow her progress and that of the team as they head out to NewZealand next month.

It seem unbelievable that Saturday is our first league games for both senior sides. The firsts welcome Dalkeith to Penicuik for a local derby and it’s great to have this fixture back in the schedule. I’m sure both sets of players will be relishing the opportunity to get back out on the pitch which I’m sure make for an entertaining game.

A strong looking 2s squad head to Corstorphine with lots of optimism and energy after two really positive friendlies and it will be great to see what they can achieve this year.

It was great last week to announce Allan Hay Roofing & Building as one of our principal sponsors, I know they had a great time at our players dinner in May and glad they’ve agreed to join the Penicuik Rugby Family.

Speaking of the Penicuik Rugby Family, next week we will be launching our new Player Sponsorship opportunity.  This is an ideal time to support a community based rugby club.  Details will be launched on Tuesday which includes in-clubhouse advertising and social media advertising.

Membership details can be found at https://penicuikrugby.org/online-membership/ please note the discount  is valid till the end of September. 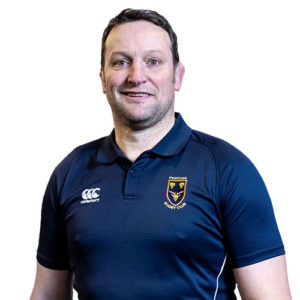 Ideally I wouldn’t have wanted to go into today’s game cold.  From memory I don’t think I’ve ever been involved in a game being cancelled because there hasn’t been a referee available.  Saying that, the SRU are actively trying to recruit new referees just now and any players or former players looking to stay in the sport should be open to considering this.

We face Dalkeith in what will be a tough game, their coach Jason has had to make the step up from assistant to full Coach late in the day but has assembled some good players and showed what they can do in their wins pre-season of Murrayfield Wanderers and their cup win over Corstorphine.  Our 1xv haven’t had the chance to play Dalkeith 1xv for some years now, however our 2xv faced up to them last season at Kings Park.

For the 4th week in a row we still don’t have a full squad to choose from with unavailabilities and injuries, however, its a mark of respect to the players that fronted up to training the last couple weeks that I’ve only made 2 changes to last weeks side which would have started

We now have a run of 6 games in successive weeks to lay the marker for this season before the Autumn International break.  It all starts on Saturday at home to Dalkeith. 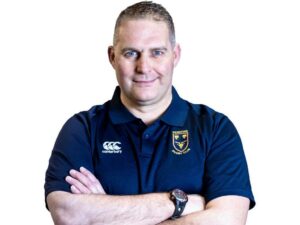 This week sees the 2nd XV travelling down to the Pans to face Preston Lodge at the Pennypit. We have not played PL for a number of years following their meteoric rise up the leagues, so this Saturday’s game is well anticipated. However let’s not get ahead of ourselves.

A quick look at our previous game which was away to Walkerburn. (The league match against Corstorphine at home at Montgomery Park was cancelled due to the death of our amazing Queen) On arrival we were surprised to see Walkerburn had fortified themselves with 7 players from Peebles 2s, one of which was old Penicuik lock Lynton Brynk. However within minutes of the game kicking off the 2s showed their class and ran in the first of what was to an 8 try haul. Try`s for Hope, Graham, Cartwright (jnr), Hawkins, McCormick, Randall, Ritchie & Mitchell saw a comfortable win 57 – 19. Highlights were a try for old boy Mark Ritchie – Matt Randall making a man of the match return to the club – Hope, Hawkeye and Graham scoring their 2nd try’s of the season – Cartwright and Mann coming on to play at 50 minutes and finally half the team having a past match dook in the tweed. Walkerburn were very thankful to us for coming down to Caberston Haugh to play. They are a club who are re-emerging from a slumber of 2 years and need help to get back in action.

We have pledged to help them where we can and keep this amazing club on the go. Let’s see how the team do this weekend down in East Lothian. It will be a stern test and a chance to see how far this team has come in terms of development.

If the line functions as well as it has been and our backs link well, there is no reason why a positive and enjoyable performance can’t be achieved.

After all we play rugby for fun and take to the park to enjoy ourselves.

1xv : we’ve selected a strong pack with Connor Grant getting his first start of the season ahead of Darren Pearson.  Our back line have the potential to attack from anywhere on the pitch and we have bags of experience on the bench if all are fit and available

2xv : Although we have a number of players unavailable we have still managed to get a strong 2xv selected.  Paul Smith steps up to prop in the absence of Gav Holmes, a solid second row in Glen & Pritchard, and our experienced centre, Hope & McCaig.  Also great to have Ross Mitchell available for the bench and hope he’ll put in a great shift once on the pitch. 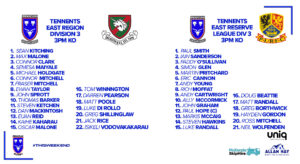 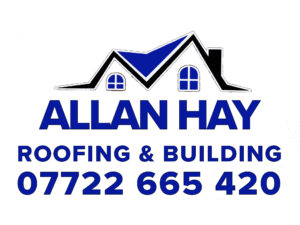 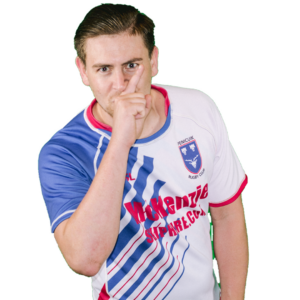 We had hoped to have heard again from our 2022/23 1xv captain Aidan Dean, however in his absence here’s the second in our weekly game…. Where’s Aidan this weekend??? 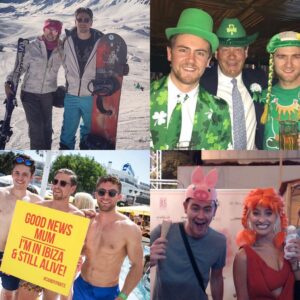 Answers on a postcard to the Old Pavilion please. 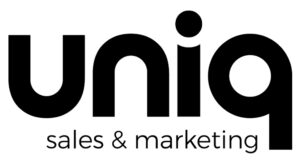 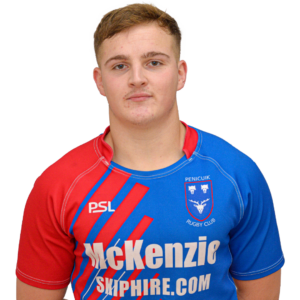 Oscar has been a key part of the Penicuik Attack line for several years now.  Able to play both Full Back and Winger he has shown strength in both positions.  He’s worked hard on his goal kicking and topped the charts last season with 58 goals.

He loves a try time photo, but can never decide on the right pose 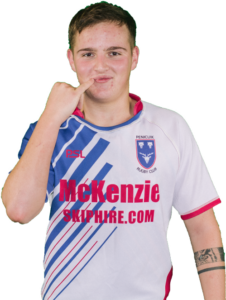 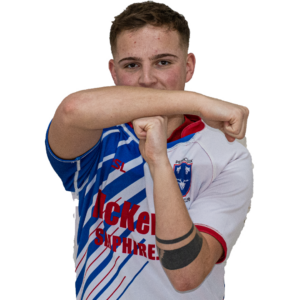 Who do you sit next in the locker room : Fraser Mitchell

In and around the Club House

It was great to find out our 2xv hooker has spent the previous 2 match Saturdays sorting his groomsman outfit for his forthcoming wedding, lets hope he makes up for his absence with an outstanding performance this Saturday.

It was noted there were 3 former Penicuik players turn out for Dunfermline rfc a week past Saturday. Former scrum half (and current Development Officer) Arran Thomas touched down for a try debut game for their 1xv against Aberdeenshire, whilst Kai Paul and Josh Boulton started for their 2xv against Grangemouth

Also noted, former centre and league winning 2017 captain Sean Thomson scored last Saturday on his debut for Stow of the Wold RFC against Newbury Blues rfc.  Sean was also knocked out later in the match by a no arms shoulder resulting in a red card, most baffling however was the video footage of his try showing him actually engaging in a ruck??  We asked our DoR Mark Blair for his reaction to Sean joining a ruck and 2 days later he’s still speechless.

There have been clubhouse rumours as to the where about of 1xv captain Aidan… however, we must congratulate Aidan on 2 points.  Firstly he planned and ran an outstanding quiz night last Saturday and secondly….. Aidan and his wife Kirsty announced this week they are expecting future Penicuik (and Scotland) 1xv number 2…. Congratulations to you both and hope all are well

Our new Micro’s rugbys section (pre-school aged 3-4) continues to attract new players at its 11am Sunday sessions, one parent did comment could we not have provided a coach the tots could look up to… however we thought this was unfair on micro’s coach Andrew Bagan.

On a sadder note, the club held the wake for former member Robyn Aitken this week.  The funeral was well turned out by the Penicuik Rugby Family, and although we wish it had been for different circumstances, it was great to see so many past captains, presidents, players and supporters back in the clubhouse on Wednesday

We kick off rugby weekends with our U16’s campaign on Saturday morning (10am) away to Broughton School.  Our 1xv make the away trip to Hawick Linden for the re-arranged game and our 2xv welcome neighbours Walkerburn to the Old Pavilion.

Sunday morning our Mini’s host their annual festival.  Teams coming Bigger, Dalkeith, Lasswade, Corstorphine & Leith.  Games kick off at 11am for P1-5 and 12:40 for P6-7.

A BBQ will be on site along with a Tombola, sweetie stall and home baking stall (donations very much welcome) 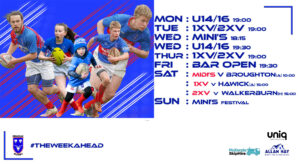